Laws-Carr-Moore Funeral Home dates back to 1901. Founded by brothers George and Lewis Laws, the funeral home was located across from the Methodist Church. Coffins and the horse drawn hearse were kept in a building next door.
George and Bertha’s son Noble and his wife Dorothy later acquired the funeral business. They purchased the former residence of Dr. Bine Whitlatch, located in front of the Whitlatch Hospital. Noble moved the residence next door to the hospital and converted it to the present day funeral home.

A third generation of the family joined the business after WWII, when James and wife Elva Laws became partners in the business. The name became Laws and Laws Funeral Home. The Laws family also operated funeral homes in Osgood and Sunman.

Ambulance service was provided by the funeral home throughout its history. In 1976, to meet changing regulations, the Moores purchased a new state certified ambulance and trained 30 local people as EMTs. This organization became known as Milan Rescue 30. Local ambulance and fire calls were answered and dispatched by the funeral home staff 24 hours a day until 911 was established in Ripley County. The Moores donated the ambulance and equipment to the local EMS volunteers in 1991 and it continues to operate as Milan Rescue 30 today.

In 1983 Charlie and Janet Moore purchased the Sibbett Funeral Home in neighboring Moores Hill, IN. In 2004 the Bovard Funeral Home in Milan was purchased by the Moores. That same year there was a new addition to the Laws-Carr-Moore Funeral Home which added a large chapel, coffee room, office, and additional parking to better accommodate the families we are privileged to serve. 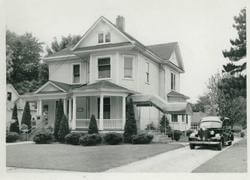 The Sibbett-Moore Funeral Home originated before the turn of the twentieth century. The undertaking establishment and accompanying livery stable were owned and operated by Mr. Abraham. The horse drawn hearse and horses were housed in the livery. At that time embalming and funerals were usually held in the home of the deceased.

Later Mr. Abraham became partners with Mr. William Ulrich in the funeral business which was known as Abraham and Ulrich Undertaking. After Mr. Abraham’s death, Mr. Ulrich formed the Ulrich and Sibbett Undertaking and Coal Co. with local mechanic Walter Sibbett.  A short time thereafter, Donald Ulrich, who was a Moores Hill school teacher and coach, entered this partnership.  In 1943, Donald Ulrich opened what is the present funeral home in Dillsboro on Lenover Street. Walter Sibbett stayed at Moores Hill to operate the business there.  This partnership was Ulrich and Sibbett Undertaking and Coal Co. with locations in both Moores Hill and Dillsboro.

In 1945 Walter and his wife Anna Sibbett purchased what is the present day funeral home. The house was built in 1908 as the personal residence of Mr. French, who was President of Moores Hill College at that time. Mr. Sibbett began an extensive restoration of the home to its original grandeur. Before the restoration was completed, Mr. Sibbett received word that Mr. French had passed away in California. It was Mr. French’s wish to have his funeral held in the residence he had built. Many residents of Moores Hill came together to help the Sibbetts prepare the new funeral home for this first funeral.

Mr. Abraham and William Ulrich started an undertaking and livery service in Moores Hill before the turn of the century.  After Mr. Abraham’s death, Mr. Ulrich formed the Ulrich and Sibbett Undertaking and Coal Co. with a local mechanic, Walter Sibbett.  A short time thereafter, Donald Ulrich, William’s son who was a Moores Hill school teacher and coach, entered this partnership. In about 1939, Dillsboro undertaker Albert Mathias who had a undertaking parlor on North Street, passed away. Donald helped Mrs. Mathias operate the business until 1943 when he purchased the residence on Lenover Street,  the site of the present funeral home.  It was also named Ulrich & Sibbett Funeral Home, now with locations in both Moores Hill and Dillsboro.  This union between Walter Sibbett and Donald Ulrich lasted until January of 1971 when Donald retired.  Mr. Sibbett remained at the Moores Hill location until his death.  The Dillsboro location was sold to Paul and Karen Filter.  The Dillsboro name was changed to Ulrich Filter Funeral Home.  The Filters operated the Dillsboro location for 34 years until Paul’s retirement.  The funeral home was sold to Kenneth and Virginia DeVries in October of 2005.  The DeVries’ continued to operate the funeral home until Kenneth DeVries’s sudden death in June of 2016.  Shortly thereafter, the funeral home was sold to Charles and Janet Moore who operate funeral homes in neighboring Milan and Moores Hill.  The Moores’s are proud to now be also serving Dillsboro and the  surrounding areas with their services. We are available to you “every minute of the year.”

A year of daily grief support

Our support in your time of need does not end after the funeral services.  Enter your email below to receive a grief support message from us each day for a year.  You can unsubscribe at any time.